What for some might be considered the horror of an empty desert, presents the promise of a fertile field for others. Basically unasked for by everyone else, but just as much inevitable for its maker, an artist creates something new out of nothing. Just because he wants to.

Next to the subject, it also has to be decided what to paint on. Whatever is chosen, the actual size of the painting matters just as much and will have to relate to everything surrounding it, but primarily to the physical size of the painter himself. At least, that is how this painter experiences it. The edges of the canvas should be considered as borders of the arena where the painter’s ‘wrestling with the angel’ will have to happen. 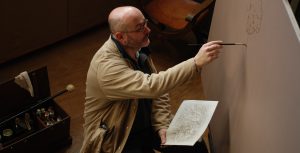 It might take a while, but at a certain point the painter will start painting. For me it always remains a delicious and so much desired moment when the blank canvas seems to hold its breath, as if it is waiting for the moment that my brush will touch it for the first time. To leave a primal trace of paint on the patiently blank surface is the very moment which inevitably will change everything. Although even in this song it might feel like that the first cut is the deepest, every very first stroke of the loaded brush will start the train’s wheels rolling, but might finally, after so many successive additions and corrections, disappear after and under so many other strokes. Like a drop of rain in the river.

If the painter doesn’t want to be drowned under in his own improvised ocean of associative choices, which by all means proves to be a legitimate choice for others, the growing image of the painting will, at least to a certain extend, have to follow the image in the mind of the painter. Or change it. Which of the wrestlers finally will be on top in the painting process will be decided by the thousands of decisive choices waiting to be related to and answered in between. But certainly not all of them. That is because a painting in the end might reveal itself as contradictive as life itself, just as much as the painter will have to submit to the fact that not all questions are ready to be answered at the same time. Not even by one overwhelming painting. Instead of just being made by capable hands, paintings, like all visual art works, are primarily created by eyes. Those of the painter of course – and finally by those of the beholder. No painter should ever underestimate the viewer’s eyes. Enough should be left over for successive interpretative associations by others when finally the brushes are put down and the drying up painting will have to survive on its own.