After the extensive work on the two rather complicated chandeliers, even eight of the twelve extras of the scene have now been ‘painted up’ from the painting’s death colouring stage. Now it is time to paint the reflection of the three different light sources on the gallery floor. 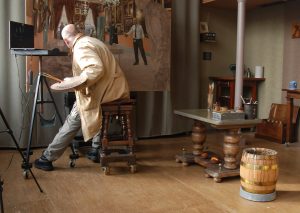 After that, it will take a few weeks time for the main scene in the foreground to be painted in and have all visual elements in place. Because a painting is not merely the sum of puzzle pieces, finally some fine tuning will be necessary to build up more contrasts on some places or blend in specific elements towards each other elsewhere. To keep it exciting for everyone involved until the unveiling, the updates on the blog will be temporarily suspended. Nothing to worry about, because as done previously, all steps in the painting process will be documented in detail and published afterwards.