Although it has been a wonderful three weeks to occupy the heart of the Galerij Prins Willem V with easel, painting and various studio materials, it also feels very good to finally get back into the seclusion of the CONTERFEYTER studio. In this renewed ‘splendid isolation’, it is due time to proceed with the next stage of the painting. 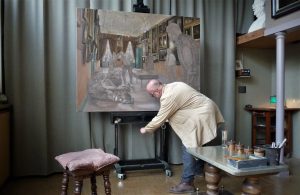 Now that the most important parts of the interior of the gallery have been painted ‘in situ’, it has now become time to work out the other parts of the DIOGENES scene. This will not only become possible by using photographic material, but also human memories. In the seventeenth century, the opposing terms ‘near de natuer’ (=after nature) and ‘van ‘t onthout’ (=from memory) were used to indicate whether specific artists were better at working from either observation or their own visual memory. In particular Rembrandt was admired by his contemporaries being equally good in both areas. 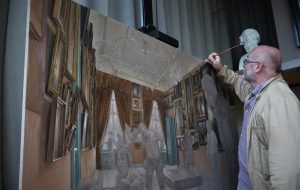 At this stage of the painting, the depiction of the eighteenth century moulded ceiling of the gallery is still in a stage of merely under-painting. Although some semi-transparent paint has already been laid over, there is still a lot more work necessary to obtain the correct tonal and color contrast needed for the return of the two chandeliers to be painted back in later. In the below image these painted over objects are merely defined in the paint structure under the paintings on the gallery wall. 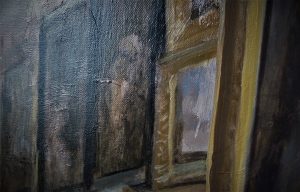 Although oil paint can be applied in many different ways, it finally will emerge in basically two different types of paint skin: either transparent or opaque. Transparently painted areas are also called ‘glacis’ or glaze. A glaze, usually consisting of a great amount of binding medium in relation to a very small amount of pigment, is recognisable as a thin transparent or semi-transparent paint layer. It is able to modify the appearance of the underlying layer, like changing the chrome, value, hue and texture of the surface. 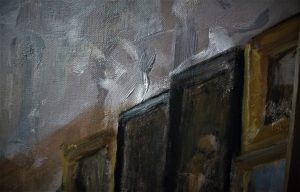 Basically, most glazing is done with either transparent or transparently applied darker paint on top of a lighter surface, which on its turn will be able to radiate through. Oil paint can be transformed into different levels of transparency, but not only by adding more binding medium. For example, many painters of the Rembrandt-school have also been known to use ground glass and semi-solid resins to increase the translucency of their paint. 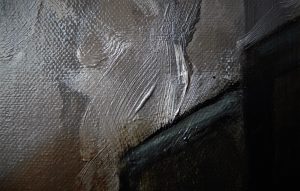 Only if the underlying surface is no longer visible – then we will speak of opaque paint. On the other hand, if opaque paint is applied very thickly, it is called ‘impasto’. Between glacis and impasto, of course hundreds of intermediate variations will be able to produce all possible appearances of the painted surface. And if that’s not enough, a painter’s brush is not only able to cover a glaze with impasto, because a dried up impasto can of course be glazed as well. These altenating processes can become very labirinthine, until even the painter himself no longer will be able to remember how he got it all together. Rembrandt and his students were very skilled in this both attractive as well as complex interplay while working on the painting’s skin.